Most people would love to set aside more money for retirement. But tax-deductible IRA contributions are limited to $5,500 per month for most of us, at best. Fortunately, those who own their own small businesses, are independent contractors or otherwise have self-employment income have another option that allows for much higher contributions:  the Self-Directed Solo 401k, sometimes called one-participant 401(k) or individual 401(k) plans.

If you qualify, setting up your own self-directed solo-401(k) allows you to effectively double-down on your allowable retirement contributions, sheltering much more money from taxes than you can relying on IRAs alone. Here’s how it works:

The Self-Directed Solo 401k allows you to contribute money on two levels: You can make elective salary deferrals as your own employee. For 2016, that limit is $18,000, or over three times what you could contribute using an IRA by itself for any given tax year. If you are age 50 or over, you can contribute an additional $6,000 in catch-up contributions. But there’s much more:

Because of the way contribution limits are calculated, solo 401(k) plans offer a nice perk for certain higher-earning plan sponsor/participants: Anything you contribute to the plan as an elective deferral not counted as compensation. Which increases the amount of money eligible for the 25 percent employer’s non-elective contribution.

Self-direction also increases your purchasing power, because your solo 401(k) can actually borrow money to make leveraged investments. Yes, this increases risk, but it also magnifies potential returns. It is quite common for self-direct solo 401(k) sponsor/participants to have their 401(k)s borrow money with which to make investments – especially in real estate.

401(k) plans have the additional advantage of substantial creditor protection – going even beyond the generous limits for IRAs established by federal law. Even the IRS can’t levy assets in a 401(k) to satisfy personal debts, since 401(k) assets are typically held in trust for the beneficiary, rather than considered personal assets.

Solo 401(k)s can also be structured to allow for personal loans to yourself from your 401(k) for any reason. Ask us about this particular feature of our Self-Directed Solo 401ks.

Using a self-directed 401(k), rather than a standard Wall Street prepackaged product allows much more diversification than is usually possible for most plan sponsors. You are not limited to a window of stocks, bonds and mutual funds.  you can bring your retirement assets to bear on any number of investment strategies and asset classes:

Caveat: The solo 401k is not a great match for you if you have any employees besides yourself and a spouse, or if you want to hire employees very soon. However, you can get many of the same benefits using a SEP IRA.

American IRA, LLC works with many successful Self-Directed Solo 401k sponsors who are even now pursuing many different successful investment strategies. For more information, give us a call at 866-7500-IRA(472). Or visit us online for a wealth of informative informational articles, brochures and other literature at www.americanira.com. 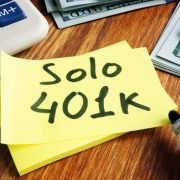 Why Independent Contractors Should Consider a Self-Directed Solo 401k

The Ins and Outs of the Self-Directed Solo 401(k)

Starting a New Self-Directed Solo 401k For Your Small Business