Looking for a great place to retire? Start with Florida.

Why? WalletHub.com recently released its “Best Cities for Retirement” listing – ranking America’s most retiree-friendly states for affordability, lifestyle and access to health care. Florida dominated it, taking five of the top ten slots, according to WalletHub editors.

Orlando took top honors as the number one best retirement destination in the country, followed closely by Tampa. Miami came in 5th, while Fort Lauderdale, a short drive north on I-95, took 7th and the Gulf Coast community of Cape Coral came in 8th.

The Miami suburb of Pembroke Pines rolls in at # 12, at St. Petersburg, near Tampa, came in 16th. Port St. Lucie, about an hour up the Atlantic Coast from Fort Lauderdale, came it at number 25.

Why do Florida cities rank so highly? A number of reasons.

Florida scored high marks for tax-friendliness: There’s no income tax whatsoever, which boosted its rankings in tow tax-related categories to the top. Other taxes are reasonably low in most of the state, which has a healthy business climate and strong unemployment rate.

Taxes on Self-Directed Real Estate IRAs are very favorable as well: Real Estate IRA income is generally tax-free in Florida – you only have to pay federal taxes on rental income at ordinary income rates.

The weather is excellent in Florida, if you can stand the heat in the summer. However, the climate is somewhat milder in Northern Florida than in the tropical zones to the South and in the Keys.

All the cities mentioned are coastal, with the exception of Orlando. Which is no surprise – access to coastal areas was one of the criteria in WalletHub’s methodology (see below). So, Florida, which has 8,436 miles of coastline, has a natural advantage in WalletHub’s survey.

Orlando is not coastal. But it compensates by having easy access to Disney, Universal Studios, Sea World and other attractions – which provide lots of activities to do with the grandchildren before you hand them back to their parents all sugared up! Plus, drive 90 minutes east or west and you are on the beach. Orlando also has a reasonable cost of living for a large city this close to the coast. And loads of great freshwater fishing in the thousands of lakes closer into the city.

WalletHub ranked cities according to the following criteria:

Looking elsewhere in the country, here are the top-ranked cities according to selected key factors broken out by WalletHub’s editors.

How to Reinvest Profits from a Self-Directed IRA

Self Directed IRA -How to Learn True Diversification 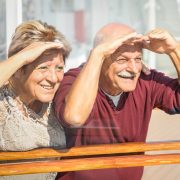 Self-Directed IRAs – Thinking Beyond the Ordinary