We’re just over 100 days into the Trump Administration, and we now have the basic outlines of the tax reform proposal generated by the Trump White House Staff and Treasury Department. There are a lot of details still to be hashed out, but thus far the Trump Administration is pushing their proposal as “The biggest individual and business tax cut in American history.”  So how will this impact a Self-Directed IRA?

It’s bold. It’s broad. And it’s also brief. Thus far, it’s about 100 words long, and printed entirely on a single page. The plan could have a tremendous effect on both business strategies and individual financial planning, including on their Self-Directed IRA and other retirement accounts.

Among the Trump Administration’s proposals:

What does this mean for your retirement portfolio? If passed, it will have the short-term effect of increasing after-tax income for anyone holding self-directed traditional IRAs, SEPs, SIMPLE accounts and 401(k)s. Indeed, all things being equal, it will increase the take home after-tax income of just about everybody with ordinary or dividend income, to include rental income from real estate IRAs, which is counted as ordinary income, anyway.

Trump proposes eliminating the alternative minimum tax. However, in eliminating nearly all itemized deductions, his plan doesn’t effectively eliminate the AMT so much as impose AMT-type rules on nearly everyone who pays taxes. Which at least brings everyone onto a level playing field.

Going forward, the plan would make new investments in Roth IRA and Roth IRA accounts more attractive. Because taxes would be lower for all brackets, the initial tax hit on Roth accounts would be less of an issue. But by choosing a Roth over a traditional account, the investor would be able to ‘lock in’ these relatively low tax rates in perpetuity. With a traditional IRA, 401(k) or other deferred retirement account, the taxpayer runs the risk that Congress will increase the income tax rate even higher than it is now. While that risk still exists with Roth accounts, we regard it as much more remote.

The reduced tax on C corporations would also benefit Self-Directed IRA investors who choose to use that structure.

If Congress eliminates the state income tax deduction, that could put a crimp on taxpayers in high tax states like California and New York. But this just might put some healthy pressure on these state legislatures to get their tax burdens under control, and would eliminate the need for taxpayers in other states to subsidize their largesse and pick up the slack.

Conservatives tend to like the plan for its broad tax cuts and overall simplification of the tax code, but unless the plan is matched by some combination of spending cuts and economic growth, the plan will add to the deficit over the next ten years.

Democrats and liberals are critical of the plan largely because most of the dollar amount of cuts would accrue to the benefit of higher-income individuals and corporations.

One item to look at: The Trump plan proposes eliminating vast numbers of deductions. Currently, traditional IRA contributions, including Self-Directed IRA contributions, are an “above the line” write off. That is, they aren’t itemized, Schedule A deductions but are taken off gross income before you get to that point.

If Congress writes a law to eliminate the above-the-line traditional IRA deduction along with most itemized deductions, then we’d still have traditional and Self-Directed IRAs – they would just receive tax treatment similar to annuities and non-deductible IRA contributions: No deduction in the first year, but taxes are deferred until you take a distribution. Then you have a higher basis, and lower taxes when you take the money out. 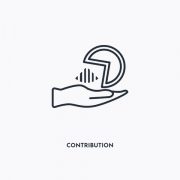 Are Contribution Limits a Problem with a Self-Directed IRA?